Straight Browsing from the Library: Keeper of My Dreams by Susan Leigh Furlong

This post is part of a virtual book tour organized by Goddess Fish Promotions. Susan Leigh Furlong will be awarding a $20 Amazon/BN GC to a randomly drawn winner via rafflecopter during the tour. Click on the tour banner to see the other stops on the tour. 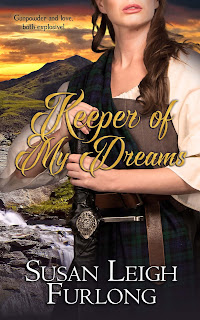 Reid Haliburton, a skilled gunsmith, wants to control who uses his revolutionary handgun until a vicious pirate decides the gun will be his. The price of refusing is Reid’s life and those of his three young sons. Reid’s only chance to save his sons is to send them away and face the pirate’s wrath alone.

Leena Cullane Adair is stunned to find three lads hiding in her cart, and, although she only met their father a week ago, he holds her heart and her dreams, and she will do whatever it takes to keep him and his sons alive.

Still, she had to get across the road, so she took her first tentative steps. She was on a mission to reach the wardrobe mercer’s shop to buy cloth and notions, one of the reasons she and her brothers had come to this awful city. Horses, wagons, and people heading in all directions at a fast pace, none of them looking out for the others, darted around her in some sort of confusing dance unknown to Leena.

She was nearly to the shop when disaster struck.

Two young girls, herding a gaggle of geese across the muddy, rut-riddled street, arrived at the same spot as three men carrying bales of fleece coming from the opposite direction…. A chaotic mess of feathers, fleece, shouting men, and squawking geese surrounded her. Stumbling, she fell facedown over a bale of fleece now sitting ruined in the mud. She righted herself just as the geese tangled in her legs again, honking and nipping at her. …She closed her eyes and prepared herself to land on her backside.

Suddenly she felt strong arms around her waist, lifting her up. Those arms carried her safely the rest of the way across the street,… pressed against a tall, muscular man wearing a leather apron, she eventually found her footing.

“Oh, my stars,” she said in a breathless voice….Turning around to see her rescuer, she looked up into the most enchanting pair of eyes she had ever seen. 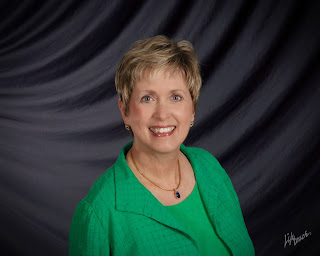 Susan Leigh Furlong was born in the middle of a blinding spring snowstorm at the University of Michigan, which forced her mother to walk across campus in the snow to the hospital while in labor. Susan doesn’t remember any of this auspicious beginning, but it always makes for a good story! As a child she moved across the country six times to various big cities before the age of fourteen because of her father’s career in women’s ready-to-wear clothing. At college she met and married her love, and moved to his small hometown in southern Ohio, and you couldn’t get her out of there with a crowbar! She taught first grade and fourth grade and raised her children who did not have to change schools even once. Creating stories started early in life—as is typical of most writers—even before she could actually write. Then came handwritten pages stuffed in her underwear drawer, followed by stories created on a manual typewriter. Her first computer—a Commodore 64—was replaced by a series of computers and laptops, which her husband promised she could never fill up the storage space, but she always did. At age 32 she performed in her first community theater play—Guys and Dolls—where she quickly realized that she wanted to play ALL the parts, which is exactly what a writer does. She writes and/or directs church-related plays and sketches and also performs and sings with a music and drama ministry, LightReaders.

Her love of history led her to write two plays about her now hometown, presented in reader’s theater style by local citizens, followed by two non-fiction books about the local history published by Arcadia Publishing. She loves to do the research even though old books and documents make her cough and sneeze! Susan first discovered romance novels when she won a copy of Velvet Song by Jude Deveraux at the local bookstore. She reads all varieties of books, but historical romance is forever her first choice.

Steadfast Will I Be and By Promise Made were published by The Wild Rose Press in 2019 and 2020 respectively. By Promise Made won the NEST – National Excellence in Story Telling – for Historical Romance for 2021. Her third book – Keeper of My Dreams – a continuation of the Cullane family adventures - will be officially released on September 6, 2021.