Straight Reading from the Library: A Moment by Marie Hall 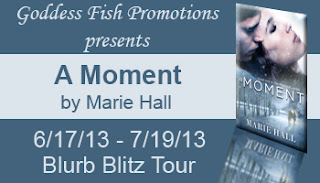 Thanks to Goddess Fish Promotions for letting us be a part of this tour. Marie will be awarding at every stop an Ebook from her fairy tales series to a randomly drawn commenter, and a Grand Prize of a $50.00 Amazon or Barnes & Noble GC (Winner's Choice) to one randomly drawn commenter during the tour.  You can see the other stops on the tour here: http://goddessfishpromotions.blogspot.com/2013/04/virtual-blurb-blitz-tour-moment-by.html

Ryan Cosgrove and Liliana Delgado are on a collision course with destiny. They don't know it yet, but before the night is over their lives will be forever changed.

Spending Valentine's Day at a burlesque bar, hadn't been Liliana's ideal way of spending a Friday night. She'd much rather be back at campus, doing homework... until she meets Ryan. Tall, athletic, and gorgeous, Lili can't keep her eyes off him, and despite his gruff manners and drunken disposition she's intrigued.

Ryan's got demons, and they're deep, dark, and eating him alive. Regardless of his attraction to the petite brunette he's tired of fighting, of pretending the last fifteen years haven't been a daily struggle just to get out of bed every morning. That night he decides to end his pain, to leave it all behind and float away into the blessed darkness of oblivion. But fate has other plans for him, Lily finds and rescues Ryan, determined she'll not only save his body, but his soul too.

This is their moment...

His voice is smooth. Rolling over my body like silk, reminding me of a good malt whiskey. Clearing my throat, I shift in my seat. “It’s not like that.”

“Funny,” he narrows his eyes, “that’s the same thing he said about you.”

He’s had a lot of vodka, I’m not sure how much, but it was enough-- enough to know that he sounds way too sober for someone so drunk.

Bringing the glass up to his full lips, it hovers along the bottom edge of it, making my pulse tremble in my throat. “Call it an observation.”

It’s weird. A part of me wants to keep talking to him, wants to learn more about him, another part is screaming at me to get up, run away, and never look back. Tapping my fingers on the table, I thin my lips.

“What’s your name?” I finally ask, it’s been bothering me all night.

He smiles and I’m surprised to note he actually has a nice one. Not as open as Alex’s, or as pretty, but way more fascinating. His front teeth are slightly chipped and the action doesn’t seem like one he’s comfortable doing. There’s a hardness around his eyes that I wish I understood. But he has a wicked dimple and I’ve always been a sucker for those.

Staring at me, as if considering whether to take this further, he finally says, “Cosgrove.” 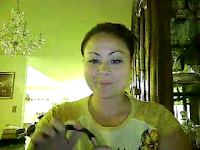 Marie Hall has always had a dangerous fascination for creatures that go bump in the night. And mermaids. And of course fairies. Trolls. Unicorns. Shapeshifters. Vampires. Scottish brogues. Kilts. Beefy arms. Ummm... Bad boys! Especially the sexy ones. Which is probably why she married one.

On top of that she's a confirmed foodie, she nearly went to culinary school and then figured out she could save a ton of money if she just watched food shows religiously! She's a self-proclaimed master chef, certified deep sea dolphin trainer, finder of leprechaun's gold at the end of the rainbow, and rumor has it she keeps the Troll King locked away in her basement. All of which is untrue, however, she does have an incredibly active imagination and loves to share her crazy thoughts with the world!

If you want to see what new creations she's got up her sleeves check out her blog: