Straight Browsing from the Library: Love Entwined by Danita Minnis 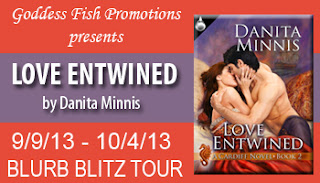 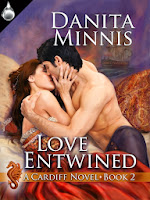 AMELIE LAURENT is on her way to the top of the jewelry designing world with no time for men. Her orderly life is about to come undone when playboy and jewelry tycoon ROMAN CARDIFF steals her away on assignment to a remote English estate. Roman wants Amelie all to himself but St. Clair Manor’s resident ghost has been waiting for her much longer than he has.

An unseen gunman takes a shot at Roman and he blames a business rival. But Amelie and Roman are to blame, for falling in love 200 years before in a time neither of them remember.

From the heartbreak of pre-Revolutionary France to modern day corporate wars, Amelie and Roman uncover a history of blood jewels, lust and demons.

When Amelie discovers her inner witch she learns the real reason she was summoned to St. Clair Manor. Il Dragone will kill to get her back. Amelie will kill if they do.

“Amelie, I was just calling you. Harold wants to see you in his office.”

Amelie came to an abrupt stop in front of the closed door and swiveled toward Suzie, who sat back in her chair and blinked.

“Good, I want to see him, too.” Amelie pushed the door open, and walked right up to Harold’s desk.

“I am sorry Harold, but I can’t do the Sweet Life…”

“Amelie Laurent, may I introduce you to Roman Cardiff.” Harold gestured toward the Burberry divan in the corner.

Amelie closed her mouth and turned, hand extended. The apology died on her lips.

Dieu. He was a Greek god in a dark tailored suit. Very tall. Different in reality. Cooler than she expected. There was arrogance in his square jaw. His aquiline nose and thick, black brows made him look like a predator.

His expression would have seemed harsh except for the warmth of the sky blue gaze traveling slowly up her body. The eyes gave his features a seraphim quality. They leisurely toured the peachy-pink lacquered toenails peeking through the front of her navy pumps, and then moved up the curve of her hips. She felt those eyes like a puff of warm breath when they grazed the swell of her breasts above the white silk blouse.

She was an innocent doe being circled by a panther that was higher up on the food chain and more resourceful.

Clearly, he wanted to take a bite out of her. His imperial stance said it was his due. His nostrils flared as he inhaled her scent.

Amelie looked down at the large hand holding hers. Warm, like a glove.

Finally, his gaze met hers.

She did not move, but something sinful shivered inside her. It was the part of her who knew this man. But these feelings weren’t hers—they belonged to that other woman. The one who waited for him at night in her bedroom.

He is real. But he could not be her dream lover.

With an unholy smile, Mr. Cardiff lifted her hand. Full lips moved over her skin in a warm caress, and she was filled with craving.

Amelie jolted out of her reverie, tried to pull away, but he held her there. Her hand relaxed in his.

Stop this, you don’t know him! 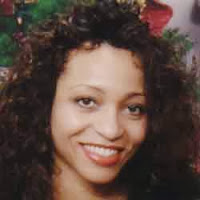 I should have known I would end up here...

My sisters and I walked ten blocks to the library every Saturday morning and picked up books to read for the week.

When I was older, I spent a couple of hundred dollars at Barnes & Noble and my mother thought I was crazy. I couldn't deny it - I just had to read (but I became sort of a closet-book-buyer after that). I started writing poems first.

Song writing was next, when I realized I had a singing voice, then singing with local bands. It wasn't long before I just knew I was going to be the next singing sensation.

And now, here I am, a shower-singer (the enclosed tile room is almost as good as a studio mike) and happier than I’ve ever been, writing paranormal romance with a healthy portion of mystery, murder and reincarnation. It's romance through the ages.