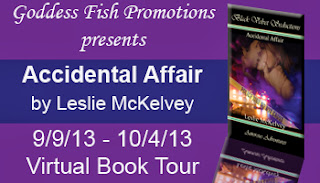 Leslie McKelvey, autthor of Accidental Affair, stopped by The Library to talk books as part of her virtual book tour with Goddess Fish Promotions. One lucky commenter on the tour will win a $50 Amazon gift card. You can see the other stops on the tour here: http://goddessfishpromotions.blogspot.com/2013/08/virtual-book-tour-accidental-affair-by.html. Remember, the more you comment, the better your chances of winning.

Leslie, thanks for coming by. What is the favorite book you remember as a child?

The Giving Tree. The end always made me sad, but I read it over and over anyway. THAT’S what true love is about.

Action-packed romantic suspense that’ll hook you from page one.

Right Place, Right Time, which is a sequel to Accidental Affair and stars Jack Vaughn’s best friend, Special Agent Bear Bristol. My publisher and I are in final edits before it goes to print. Hopefully, it’ll be released by the end of the year (YEA!)

I like both. I like to hold a book in my hands, feel the paper, turn the pages, and smell the ink. But you can’t beat an e-reader if you’re traveling or if the book isn’t available in print, which is happening more and more these days. I hope they don’t completely discontinue print books (oh, rue the day!).

When I’m reading it’s one at a time. When I’m writing I can work on multiple books at once. I have a dozen completed manuscripts and more than that in various stages of production. I write until I run out of ideas, and if the block doesn’t pass after a day or two I’ll open an old manuscript and reread, see if that shakes anything loose. It usually works for me, but it makes me feel slightly schizophrenic.

When I was younger I would dog-ear (my sincerest apologies, Librarian Judith :-)), but now I bookmark. I have recognized the evil of my former ways and have done my best to make amends!

Having a police officer hubby and three boys means I don’t have a lot of time to read, and I prefer not to be interrupted when I get into a story. Hence, I wait until everyone else is in bed before cracking open that book or e-reader. Helps that I’m a vampire….

I like many genres, but I guess romance would have to be my favorite. I know many people look down on “chick-lit” but I read to escape and get away from the world, not immerse myself in it. The only exception to that rule is military biographies, like Marcus Luttrell’s Lone Survivor. EXCELLENT book.

Absolutely! If I can get someone else interested in reading anything I’m there. I’m still working on my ten-year-old son who flatly says he doesn’t like to read. I tell him, “If you don’t like reading you’re doing it wrong.”

A dull book, bad grammar or writing mechanics, or a lack of a plotline or believable characters will keep me from finishing a book. Being OCD I always like to finish what I start, but sometimes it’s just NOT possible. And, as I get older, I have to remind myself that life is too short for bad fiction.

Jack Vaughn is sure his life is over as he tumbles down the wooded hillside onto the deserted two-lane stretch of asphalt. Years of work ended with a single gunshot. Yet, it’s not over.

A good Samaritan stops to help him, despite the danger he poses to her.

Laine Wheeler knows better than to stop for strangers on the rural Montana highway near her home, but her conscience won’t allow her to leave an injured man behind.

What she doesn’t know is the man is an undercover ATF agent tasked with infiltrating a domestic terrorist group. His cover has been blown and helping him will put her life in danger.

Though there is an instant attraction, Jack knows that beginning a romantic relationship with Laine would be both unfair and unwise. Yet the farther they run, the harder it gets to ignore the feelings that are surging between them. 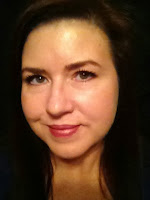 Leslie McKelvey has been writing since she learned to write, and her mother still stores boxes of handwritten stories in the attic. Leslie read her first romance at 12 and was hooked. When her high school Creative Writing teacher told her she needed to be a novelist, she decided to give it a try. Finally, at the ripe old age of...forty-something...her debut novel, Accidental Affair, made it into print through Black Velvet Seductions Publishing. The publisher has also contracted two more manuscripts, which will follow Accidental Affair shortly.

Leslie is a war-veteran who served with the U.S. Navy during the Gulf War, and she was among the first groups of women to work the flight deck of an aircraft carrier. During her five years tour she was stationed at NAS Miramar and was an F-14 Tomcat mechanic and plane captain. While in San Diego she spent time on the carriers USS Independence, USS Ranger, USS Lincoln, and the USS Nimitz. The final two years of her enlistment were spent on Guam and her squadron frequently deployed to Japan and the Middle East.

She learned everything she knows about firearms and tactics from her police officer husband, who is a weapons expert, range master, and firearms instructor for one of the most highly-respected law-enforcement agencies in the world (and one he wishes her NOT to disclose). He is her biggest supporter and her unpaid consultant on everything law-enforcement and weapons related. She has three boys who keep her very busy and contribute daily to her growing number of gray hairs. Her oldest son is a United States Marine and the younger two have vowed to follow in their brother’s footsteps (OOH RAH!). She spends her off-time (kidding...WHAT off-time?) reading, taking pictures, and sending lead down range (that's shooting, for those who are unfamiliar). One of her favorite scents is the smell of gunpowder in the morning....

www.amazonred.wordpress.com
Buy the book at Amazon, BN.com, or Smashwords.
Posted by Librarian Judith at 4:00 AM