Straight Browsing at the Library: Winter's Heat by Cristin Harber 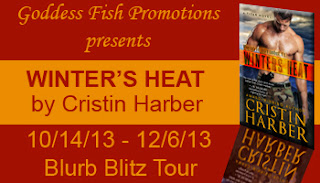 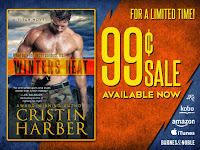 Browse through Winter's Heat by Cristin Harber today at The Library--and, for a limited time, it can be bought for less than a dollar!! In addition to that, one commenter will win a $25 gift certificate to Victoria's Secret-- so be sure to leave a comment! You can see the other stops on the tour here: http://goddessfishpromotions.blogspot.com/2013/09/virtual-blurb-blitz-winters-heat-by.html.

After putting her life on the line to protect classified intelligence, military psychologist Mia Kensington is on a cross-country road trip from hell with an intrusive save-the-day hero. Uninterested in his white knight act, she’d rather take her chances without the ruggedly handsome, cold-blooded operative who boasts an alpha complex and too many guns.

Colby Winters, an elite member of The Titan Group, has a single objective on his black ops mission: recover a document important to national security. It was supposed to be an easy in-and-out operation. But now, by any means necessary becomes a survival mantra when he faces off with a stunning woman he can’t leave behind.

When Titan’s safe houses are compromised, Colby stashes Mia at his home, exposing his secret—he’s the adoptive father of an orphaned baby girl. Too soon, danger arrives and Mia lands in the hands of a sadistic cartel king with a taste for torture. As hours bleed into fear-drenched days, Colby races across the globe and through a firestorm of bullets to save the woman he can’t live without.

Setup- Colby Winters is running out of a cartel kingpin’s mansion during a gunfight to a waiting Titan team member.

Gunfire surrounded her. Coming for them, shooting away from them. They fired. He fired back. The burnt gunpowder floated behind him, blazing into her nose and eyes. Still, she pushed, moving as he moved, tracing his cross-hatched steps, ducking when he ducked. A shadow behind the man.

She heard a thump. He growled and missed a step but didn’t stop moving. Brilliant red blood sprayed onto her. He didn’t slow. Her legs burned keeping the pace.

They rounded the corner, and he pressed her against the stucco wall. His blood stained her. It painted the wall and covered his hands. Vehicles came their way. Armed men poured from a hole in the perimeter fence like ants from an anthill. Fireballs from the jungle hit the vehicles. Violent explosions sent deadly fireworks into the sky. Rubber and diesel burned hot. Black smoke billowed around the armed men running toward them.

The heat, humidity, and smoke would have slowed a lesser man. So would a gunshot wound. He scanned the vast lawn.

“We have to make it past that hole in the fence. There’s a vehicle waiting for us. We’ve got a sniper in the trees, and two more men on the ground. When you see someone dressed like me, you run like hell toward him. Got it?”

“You’re hurt.” She wanted to run her hands across his skin and stop the bleeding.

“I can.” She gave him a strong nod, exacerbating her headache. She didn’t care. Colby was here, and she’d do whatever he needed her to do.

He gave her a small push in the right direction. Bullets sounded around her. Men ran toward them, guns pointed their way. The shots hit the grass, spitting up dirt, and slapping her face. She tasted blood and grit, and felt the filth in her mouth, which caked her lips and teeth.

White-hot pain rocketed through her. A dizzying flash made her stumble. He grabbed her upright.

“Flesh wound. Keep going,” he shouted above the noise. His teeth were gritted together. He huddled beside her, pulling her. “There’s Jared. Run!”

Another thump. He was hit again, as he shielded her from the rain of artillery. One by one, men advanced toward them and were dropped by a sniper. But as one went down, another appeared.

She heard another bullet hit. Winters dropped to his knee, pulled Mia under him, and cursed violent threats. His sweat and blood coated her. She felt it through the layers of clothing and vests. He scooped her with one arm and crawled behind a statue.

“How bad are you hurt, Colby?”

“Doesn’t matter.” His labored breaths worsened with each passing moment.

Winters stopped laboring and laughed. “You’re unreal, you know that?”

Mia glared at him.

“Bad. But I think Kevlar got most of it. Everything heals. I’m not worried. Jared’s twenty yards ahead, picking them off. We have to go for it right now. Or we don’t have a chance. You got it, babe?”

“I know you can. Run, baby, run.” He took off at a limped sprint, acting as a barrier from the fire again.

His leg went out from under him. The whiz of bullets went to slow motion, the sound ceased. Mia dropped on bent knees, watching him on the ground.

“Run, goddamn it,” he shouted. His veins popped out of his neck as he fired into the distance.

The world came back, loud and furious. Her legs moved, even though her mind was numb. Jared appeared out of nowhere. He jumped from his perch and snared her with an arm, dragging her into the vehicle.

Jared threw the vehicle into gear and spun tires as he tore down the makeshift road. Branches and jungle leaves scratched at the windshield.

“Colby’s hurt.” Tears and terror filled her throat. The very depths of her soul ached. Her screech turned to a pleading whisper. “Please. Help him.”

“They were right on your tail. They’ve got him by now.”

Dread ricocheted through her head. All the pain and loss pressed onto her. Suffocating despair ripped her apart. Tears streamed down. Rapid breaths came fast. Too fast. She tried to cut them off but failed. All went black. 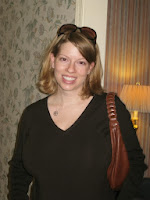 MOM. WIFE. AUTHOR.
Lover of all things sexy and happily ever after.

I live outside Washington, DC with my family: my husband (who doesn’t mind my collection of book boyfriends), an independent toddler, and an English bulldog named Britta who loves to be a conversation piece. Oh, we have a baby on the way—arriving about the same time as WINTERS HEAT debuts!

I love southern food, listen to country music, am always too hot or too cold, and spend hours reading and writing. I cheer on my University of Louisville Cardinals-GO CARDS! When I’m not pregnant (or nursing), I like a little bourbon or sweet wine. Pregnant or not, I love a lot of chocolate.

I can’t save the world, so instead, I write about those that do. There’s a special place in my heart for those who keep us safe. My Titan series debuts this fall with five titles available in 2013: WINTERS HEAT, GARRISON’S CREED, WESTIN’S CHASE, CHASED, and GAMBLED.

Buy the book at Amazon, Kobo, iTunes, Barnes and Noble, or All Romance.
Posted by Librarian Judith at 4:00 AM