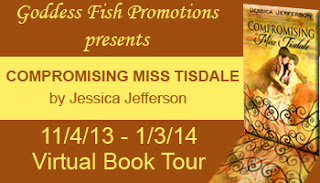 Browse through Compromising Miss Tisdale as Jessica Jefferson stops by The Library as she is on her virtual book tour with Goddess Fish Promotions. Ask Jessica a question or leave a comment for a chance to win a $50 Amazon or Barnes and Noble gift card. You can see the other stops on the tour here: http://goddessfishpromotions.blogspot.com/2013/09/virtual-book-tour-compromising-miss.html.

Ambrosia Tisdale is the very picture of propriety and the epitome of what a respectable young lady should be. Haunted by a memory and compelled by her family, she pursues perfection to a fault.

The Earl of Bristol, Duncan Maddox, has returned to London after years of familial imposed exile. As the second son, he has led a life filled with frivolity, leisure, and a healthy dose of debauchery. Now his older brother has died, leaving the family’s flailing legacy in Duncan’s unwilling arms.

At the behest of his uncle, Duncan is advised to do the one thing that could provide instant fortune and respectability – he must marry. But there is only one prospect who meets the unique requirements to solve all the Earl’s problems – the lovely Miss Ambrosia Tisdale. But securing the prudent daughter of a Viscount’s hand proves to be more challenging than this scandal ridden second son of an Earl has bargained for.

With scandal, extortion, treachery, and even love itself threatening to keep him from his goal, will Duncan succeed in compromising Miss Tisdale?

Duncan spun her around the room with a grace that was unprecedented, despite her extensive experience. She was suddenly very aware of her own awkward steps. Ambrosia raised her eyes to look into his, taking note of just how many lines crinkled at the corners when he smiled – which was often. He smiled much like her sister Tamsin – unadulterated, as if no care in the world can dampen their spirits. She was often jealous of her sister’s easy joy, but as she basked under the light of his, she too felt a bit more carefree.

And that was what attracted her to this wicked man - the expectations of society, of her family, and herself were made lighter by proxy.

The music coming from the orchestra drowned out the other couples and the spinning made her feel as if she were in some sort of inebriated state, despite only indulging in only two cups of ratafia. Ambrosia was by no means a dainty woman, but in his arms she felt as if she were light as air.

Duncan appeared cheerful, but not nearly as heady as she felt. “I hope you find my dancing agreeable. It is somewhat an area of pride for me. When I was younger, my uncle insisted I learn to dance well, and years later I am eternally grateful for the skill. In fact, I’ve been told many times that it is certainly the best thing I do . . . on two feet.” The gold flecks in his eyes flashed with the wicked innuendo of his statement.

Jessica Jefferson makes her home in northern Indiana, or as she likes to think of it – almost Chicago. Jessica originally attended college in hopes of achieving an English degree and writing the next great American novel. Ten years later she was working as a registered nurse and reading historical romance when she decided to give writing another go-round.

Jessica writes likes she speaks, which has a tendency to be fast paced and humorous. Jessica is heavily inspired by sweeping, historical romance novels, but aims to take those key emotional elements and inject a fresh blend of quick dialogue and comedy to transport the reader into a story they miss long after the last page is read. She invites you to visit her at jessicajefferson.com and read her random romance musings.