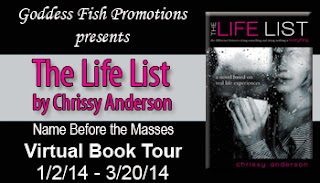 This post is part of a virtual book tour organized by Goddess Fish Promotions. Chrissy will be awarding a $50 Victoria’s Secret Gift Card to a randomly drawn commenter during the tour. You can see the other stops on the tour here: http://goddessfishpromotions.blogspot.com/2013/11/virtual-nbtm-book-tour-life-list-by.html.


Why did you start writing?

I had a story to tell. But not just any story—My story. The moment I left a bar with a guy six years younger than me...when I was a seemingly happy married woman, I knew I had a big story to tell. Well, the story became HUGE when that chance encounter led to massive amounts of lies, desperate and gross manipulation, and shockingly, the kind of love I never knew existed.

I was a good girl—a girl who created a detailed life list at the age of sixteen and I diligently stuck to it. I worked my ass off to achieve all of the things I thought I wanted in life and by twenty-eight…I almost had it all. But then that chance encounter at the bar made me question the life list and all that I had accomplished. In one night my entire world was turned upside down.

My story is based on my life and it examines the sanity of blindly following the bucket list we make when we are young and the impact of changing our minds after we have checked most things off the list. It’s a dilemma that millions of women face every day. There are so many women who are torn between choosing love and obligation. I know their struggle…I know their heartache. I know their story.

Did you ever think it would pay the bills? Or do you hope that one day it will?

Ha! No. I never even went there, really. I think of The Life List in terms of exposure—I want massive amounts of it. There’s a message in it that needs to be publicized. I don’t want any young girls making the same mistakes I did, and I want the ones that did to know they’re not alone. If money flows in as a result of the exposure, that’s great! But if I have to give away thousands of copies of The Life List (part I of The List Trilogy) to spread the word, I’ll do that too.

Who is your favorite author? Why?

I don’t have one. Now if you asked me what my favorite movie was…that’s another question! Hands down, it’s The Bridges of Madison County. It blew me away how such a simple production with characters twice my age could have bring me to my knees. I felt Francesca’s pain. I felt her heartache. I felt her struggle between love and obligation. Little did I know I’d be living her story just a few short years after watching the movie. I just got chills!

Have you ever received a rejection letter? If so, how did you recover?

Of course! I laughed. Their loss!

Do your books simply come to you, or do you struggle for each chapter?

Since The Life List is based on my real life love triangle you’d think it came easy to me. Well, in terms of character development and staying true to each character, it was obviously extremely easy—I know everyone! But in terms of laying my heart and soul on the line for all of the world (let’s hope) to read…not so much.

There were many times I felt compelled to stray from what I really did or really wanted to say. I was scared readers would hold it against me or judge me for putting it all out there. But when you stray from the truths of human interaction—when you avoid the uncomfortable and try to make things pretty for story-sake—the story immediately loses its interest, it becomes phony. It becomes blah! I chose the opposite of blah. Hard as it was, I committed myself to the truths of human interaction—the good, the bad, and the ugly of it. I don’t expect everyone to agree with my choices, but I want everyone to ask themselves, “What would I do if I were Chrissy?” There’s no way my readers would ask themselves that question if I avoided the truth. They’d care less what I was doing; let alone what they’d do in my shoes! The story would be too damn boring!

Ironically, a lot of my readers have held what I did and said against me and they have judged me for the mistakes I made. They told me so…as they were giving me a 5 star review! That I made them laugh, cry, scream at the book for the injustice and inappropriateness of my behavior, that I was authentic and vulnerable compelled them to leave me a glowing review. More times that I can count I’ve been called the woman you hate to love. Following the truths of human interaction is, so far, making most of my readers applaud and it’s making me smile.

What is one genre or sub-genre you wish you could try writing in?

Who is your favorite male character that you’ve written?

Are you really asking me to choose between Leo and Kurt? Argh! I almost feel like I’ll give away the ending of the trilogy if I tell you that!

You won’t be able to see this at the end of The Life List as much as at the end of The Hope List (the last installment), but I have to go with the character who shows the most growth, and that’s Kurt. I’m not at all saying he’s my favorite in real life, (again, I don’t want to give you any ideas!) but Kurt transformed himself without compromising his values and the things that matter the most to him. He did it in a way that makes the reader forgive the mistakes he made in The Life List, and I’m most proud of the way I’ve written him.

I have a running poll on my website where fans can vote for who they want Chrissy to end up with (www.askchrissy.net). At the end of The Life List (before book #2, The Unexpected List was released) the poll sat at 80% Leo, 20% Kurt. After The Unexpected List was released the poll shifted to 60% Leo, 40% Kurt, and it still sits tight there! It’ll be interesting to see how it shifts after they read The Hope List! I just got chills again!

Who is your favorite male character written by someone else? You know the one? The one that makes you wish he was your character?

Noah from Spark’s The Notebook. He’s opinionated, confident, sexy…yet he’s not for everyone. But he was for Allie and that’s all that mattered. Noah and my Leo are very similar.

Who is your favorite female character that you’ve written?

Who is your favorite female character written by someone else? You know the one? The one that makes you wish she was your character?

I have to go back to my girl, Francesca, from The Bridges of Madison County. She makes you think. I hope I’ve written Chrissy the same way.

Tell us about your latest release.

Sigh…The Hope List. It’s the last installment of The List Trilogy and it’s KILLING me! It’s killing me for two reasons. One, The List Trilogy feeds into a whole new trilogy (tentatively titled The Truth Trilogy) and I have to come up with the outline of the new trilogy before I put the old one to bed. It’s like writing four books in the amount of time it supposed to take to write one! (Fans are NOT happy with the wait.) The other reason it’s killing me is that it’s sooooo hard to say goodbye to the characters. While most of them will make an appearance in the next trilogy, they won’t be central to the storyline and it’s hard to phase them out. I love every single one of them. I can hardly believe this journey is coming to an end.

Anything else you’d like to add that I didn’t cover?

Thank you for hosting me on your blog! If it wasn’t for people like you, no one would know about me! 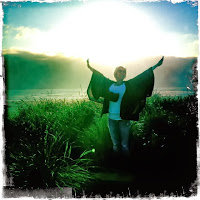 CHRISSY ANDERSON spends her life doing exactly what she always wanted: doting on those she loves. A former fashion executive, she is a writer, wife, and mother whose own life events inspired The Life Lis. She lives in Portland, Oregon, with the love of her life and her beautiful daughter.


When she was just sixteen, Chrissy Anderson made a life list…

…The outcome is a dream husband, a career to envy, and the kind of best friends every girl wants. Then out of nowhere…an affair. What would you do if you realized the life you created wasn’t right for you? You think you know the answer? Think again. Follow Chrissy as she lies and cheats and ultimately learns to tell the truth to herself and those that she loves.

At twenty-eight, Chrissy has been steadily checking off the boxes on her life list as she mocks the style and life choices of everyone around her. She’s got it all—or so everyone thinks. Her life begins to fall apart when she unexpectedly meets a much younger man, Leo, who makes her question just how perfect her “perfect life” really is. With the help of her no-nonsense therapist, Dr. Maria, Chrissy learns more about herself than she anticipates. But it isn’t until she stares an untimely death in the face that Chrissy is catapulted into an overdue reality check. Only then does she scramble to correct the mistakes of her past…trying to figure out if it’s her husband Kurt, her lover Leo, or both that she has to leave behind to make everything right.

Women of all kinds will be able to relate to the pressure of constructing the ideal life, only to fall short. Not everyone will agree with Chrissy Anderson’s decisions, but all will pause as they follow along on her journey to ask, “What would I do if I were her?”

The Life List, book ONE of The List Trilogy, will take you on a rollercoaster of emotional highs and lows as Chrissy makes mistakes on her bumpy road to happiness. Come along for the ride and you’ll be left breathless and ready to find out what she does next in book TWO, The Unexpected List.