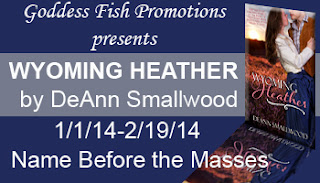 A special welcome to DeAnn Smallwood who has stopped by The Library to tell us about her characters' careers. Leave a comment or ask a question to be entered into a drawing for a $25 Barnes and Noble gift card. You can also see the other stops on her tour here: http://goddessfishpromotions.blogspot.com/2013/10/virtual-nbtm-tour-wyoming-heather-by.html.

Character Careers: Why what they do shows who they are
When I retired from being a health care administrator, I went through months of not knowing who I was. Sounds crazy, huh? But I wasn’t DeAnn Smallwood. I was, and had been for seventeen years, DeAnn Smallwood, Administrator. What I did identified who I was. You have to, or at least I did, dig to find the real you buried beneath the career. The same is true of my characters. Before I start a new book, the idea comes to me to write about a doctor, midwife, lawyer, teacher, or rancher. Then I explore the career and voila out comes the character.

In Wyoming Heather, my character, Heather, is first and foremost a rancher. She is also a woman, a desirable woman. However, that is secondary to her love for her ranch, her animals, and her determination to succeed as a woman alone in this male dominated arena. In chapter 2 you can see Heather struggling with being both woman and rancher. But you can also see her pride in who she is.

Heather brushed the dirt from the front of her pants. Rising, she gave the rope a practiced jerk and freed the calf’s hoofs, releasing the bawling animal to find its mother. Her mouth was dry, her clothes filthy. She was wearing not only the dust of the land, but hair and blood from the calves she’d spent the morning branding. Hair, blood, and dust.

Some perfume, she thought with disdain. I’m a real lady.

Still, a part of her burst with pride as she surveyed the small herd of calves and cows milling in the field.

Heather is strong and will need a strong man who can not only love her, but also love and admire her strength. Whip Johnson is just the man who can do this. He’s a former Texas Ranger who has spent the last five years hunting the man who killed his wife. A Texas Ranger with a broken past who meets the woman that will change his future.

They meet on the banks of the Powder River. A river that runs through a ranch that Whip turned his back on five years ago. Heather has been diverting water from Whip’s land to hers. Needless to say, they clash:

“Doesn’t matter.” Heather walked over to the man, slamming her sweat-stained hat down over the mass of auburn curls framing her face. Her hazel eyes shot green sparks as she narrowed them at the tall cowboy. “Like I said, doesn’t matter. I need the water and you don’t. The little bit I’m diverting won’t matter one little bit to you. Not one damn little bit!”

“Who are you, lady? You dress like a man, you talk like a man, and if you just hadn’t had a bath in that river, I’d bet you’d smell like a man.”

Their love for ranching, blossoms into love for each other. Two strong people formed by their chosen careers. Whip treasures this determined woman and delights in teasing her and letting her think he’s bending to her will. His favorite response to her is a drawled: “Well now, Heather.”

He cushioned her body with his as he rode back to his ranch. Tears formed in his eyes as the realization of how close he’d come to losing this woman that held his heart and his reason for being. He tenderly brushed his lips across her forehead.

I love writing about strong characters that made their careers vital to carving out a life in the harsh and unforgiving west. I hope you’ll enjoy Wyoming Heather and see that heather and love does flourish on the Wyoming plains.
MEET THE AUTHOR

I live in Colorado with my husband and my two Yorkie kid dogs: Stormy, four pounds, and Eli, six pounds. I’m a native of Colorado, but I lived several years in Wyoming and Montana. I draw from these beautiful states for much of my material. My historical romances are: Montana Star, Sapphire Blue, Unconquerable Callie, and Wyoming Heather. Tears In The Wind is a contemporary romance. Then I changed genres from my beloved romances and wrote, under the pen name of D. M. Woods, my first suspense/thriller: Death Crosses The Finish Line. The second book in this ‘death’ series, Death Is A Habit, will be out later this year. Truly, I mean it when I say my greatest pleasure next to writing is having my books read and enjoyed. There are many more stories just waiting to be written and enjoyed.

Heather is a spirited, independent woman living alone on a ranch left to her by her parents. She is also a healer of animals, domestic and wild. A woman doing a man's work, running a ranch that everyone said couldn't be done, not in this untamed, vastly unsettled land, in the mid 1800's. The ranch had everything she needed except water. She stole that from a neighboring abandoned ranch watched over by a lonely cabin and a grave.

He rode alone, coming back after five years to an empty cabin, a run-down ranch, and a grave on a hill. A former Texas Ranger burnt out on life and afraid to love. Whip had spent five years hunting the man that took his wife's life and left him to die.

Whip and Heather meet in an explosive moment on the banks of the Powder River. Both lonely, both drawn to one another, and both stubbornly fighting the attraction.

Whip vowed he would take up his dream abandoned five years ago and make his beloved ranch profit and to put aside the sweet linger of all memories shared by him and his wife. The ranch would be a jealous mistress occupying his every thought and every minute. He had no time or desire for a woman much less a pair of runaways from The Orphan Train, stowaways in Whip’s wagon and onto the Powder River Ranch.

But fate heeds no one or no thing. The criminal from Whip’s past reemerges in the present. Now, Heather is in danger and Whip stand, once again on the cusp of loss. Fate shows a strong, willful woman, full of love and compassion, just what she’s been missing in her life. And it shows a calloused Texas Ranger that Heather and love does flourish on the Wyoming plains.

Buy the book at Amazon
Posted by Librarian Judith at 4:00 AM