Straight Reading from the Library: The Changeup by Rhonda Shaw 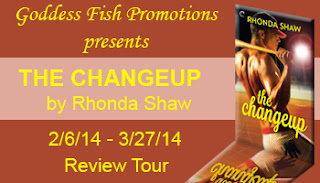 Thanks to Goddess Fish Promotions who provided The Changeup for review as part of a virtual book tour. Rhonda will be awarding a $25 Amazon GC to a randomly drawn commenter, so be sure to leave a comment or ask her a question. You can see the other stops on the tour here: http://goddessfishpromotions.blogspot.com/2013/11/virtual-nbtm-review-tour-changeup-by.html.

After nine years of striking out in the dating department, Maddie Hamlin is throwing in the towel. But just as this mom resolves to remain single, she meets sweet and sexy pitching phenom Chase Patton at a family dinner. He’s perfect for her and aside from the fact he’s only twenty-two.

Chase knows he should be focusing on his rookie year with the Detroit Rockets, but he can’t stop thinking about Maddie. He doesn’t care that the beautiful school counselor is twelve years older, and he’s already lost his heart to her adorable daughter. When an incredible date leads to an incredible night of passion, he knows he never wants to let her go.

But dating in the media spotlight is a whole new ball game. Maddie quickly discovers that not everyone accepts their unconventional relationship and that finding love may mean losing everything else…

We first meet Maddie at a very boring first (and last) date where she decides that she is taking a break from the dating game and concentrating on just being a mom to her daughter.  At a family dinner, she meets Chase Patton--who, in the world of baseball, is famous--but all Maddie knows about baseball is that includes a ball and a bat.

The two are attracted to each other and Chase is great with Bree-- but the twelve year difference in their ages scares Maddie off initially.

This is an easy read and I really cared about the characters, even though I wanted to shake Maddie sometimes.  Chase is very mature --often described by his teammates as being more of a 40 year old.  I loved some of the secondary characters too, especially Karen... I see a book for her and Chase's teammate in the future.

No spoilers, but I absolutely loved the last scene... just sayin'.  The author did a good job throwing in just enough issues to keep them apart long enough for the reader to be glad when they get back together.


Maddie felt herself blush fiercely at the lingering look he gave her, but she remained where she stood and watched as he walked through the living room and out the front door, keeping a smile plastered on her face even though it felt as if everything was freaking out internally. When the door closed behind him, she closed her eyes as she let out the breath she’d been holding and slouched against the counter. This was a bad idea. Nothing good could come from it; in fact, the only possible outcome was one of them getting hurt. But even knowing that, she couldn’t stop herself. She couldn’t ignore the fact that he got her juices flowing without much effort.

Despite all that, it wasn’t enough. She was much older than he was. They were in two different stages of their lives; there was nothing to build on. While she was looking to lead a quiet, comfortable and peaceful life, he should be looking for excitement, thrills and new experiences—casualness versus commitment, living-it-up versus settling down.

And then there was the inevitable scrutiny of their age difference. Even if they got past it, others would comment on it. Their families would definitely have opinions on the matter and families were never ones to keep their opinions to themselves, especially ones that had people like Lenore in them, regardless of the existing awkward situation with Chase and her niece. How would they ever get past that? It wouldn’t be easy, but was it worth it?


After writing one mind numbing technical document after another, Rhonda Shaw decided to combine her love of writing with her love of reading romance. Born in California, but transplanted to the Midwest, Rhonda is a warm weather girl to the bone. She works in the software development industry and was a lifelong dancer until her body told her it was time to come down off her toes. For more information about Rhonda and her books, please visit her website at http://www.rhondashaw.com.