This post is part of a virtual book tour organized by Goddess Fish Promotions. Nicholas Fillmore will be awarding a $10 Amazon/BN GC to a randomly drawn winner via rafflecopter during the tour. Click on the tour banner to see the other stops on the tour.

I was not a precocious reader. (In fact I was more of a writer, actually.) I had some big books of fairy tales. And a near-complete set of Hardy Boys. I do remember enjoying book discussions in Mr. Choiniere’s 5th-6th grade class. A half-dozen of us would join Bob at a kidney-shaped table at the front of the room and discuss the daily reading, which I loved more than anything else. I still remember our texts: To Turn a Stone and The Sun That Warms, Theodore Clymer books.

Raymond Chandler, The Long Goodbye. There is a class of writer—I would include PG Wodehouse—who are able to envelope us in their setting, their worlds, and whose characters compel real affection. You know, I just want to be there with Philip Marlowe in his breakfast nook while he’s making coffee, late LA morning sunlight behind the curtain. That world can seem more substantive than one’s own.

All the things I shouldn’t have done, but did anyway.

Right now I’m reading Christopher Hitchens essays. I’m teaching a class in writing arguments and am a fan of his erudition as well.

In the Country of Last Things, Paul Aster.

Like dog ears or unpaid late fees? I do have several unfinished books that I need to check back out of the library. I do generally try to finish books unless I hate them. That was a bad book habit I disabused myself of: the need to finish each book I started. Art is long, life is short, as they say.

These days e-reading is quite a bit easier, though of course I still love books as aesthetic objects. I take quite a bit of pride in my design and typesetting of smuggler; the Kindle and epub versions not so much, on top of which that stuff was just a drag to do.

One thing I don’t understand and find onerous, however, is the library’s (Kobo-Overdrive’s) insistence on using a single check-out model similar to that of the physical library, which seems to defeat the whole purpose of e-books. Despite all their other faults, Amazon’s Kindle Select program, based on a streaming model, is quite a bit more forward thinking—unless I’m missing something here. For an unknown like myself, exposure is more important than short term profits,

Multiples, unless something really catchers and holds my attention. Kinda like being at a party….

Aha, I knew we’d get around to book mutilation. Book marks, of course. I’m not a savage!

Primates of Park Avenue. I don’t think I got past first chapter. Self-aggrandizing and totally pseudo.

From Here to Eternity, by James Jones. As I live on Oahu, I find it a wonderful evocation of place (and time) besides being a pretty searing exploration of a type of lost male. (I’m afraid I’m not up on the latest literary enfantes terrible; there’s just so much canonical reading one must do.)

In bed or on the bus.

No, that’s just giving them away. Same goes for CDs and sweaters.

By kind. I like to think of the bookshelf as a literary gathering or conversation. Certain books you just wouldn’t set next to each other because of clashing sensibilities and styles. It’s like having certain friends that should never meet.

Definitely. Part of my training as a poet is to immerse myself in the rhythms of a book—linguistic and otherwise—which you don’t get in a single reading. Of course some books—Shakespeare—reward successive readings while others strike one upon return as embarrassing juvenilia.

If a book is lacking authenticity of voice or experience; or if there’s no occasion for the book. Charlie Simic, whom I studied poetry with, had some things to say about a certain fashion in poetry, a kind of indeterminacy in which the speaker of the poem is going on about the weather or whatever and you’re like, Why is he telling me this? (my paraphrase). I guess, too, Robert Frost’s dictum, “No surprise for the writer, no surprise for the reader” is another prerequisite for finishing a book. Good writing is always an act of discovery—not telling the reader what you already know or think.

Sadly, I’ve given up on dragging milk crates full of books from town to town. I did ship most of my stuff to Hawaii when I moved here but have slowly been divesting myself. Which is a bummer now that my daughter is starting to read books. I’ll want to pluck a book off the shelf to read her a passage, only to discover that I’ve given it away or sold it. (Bookends in Kailua pays a fair price for used books.— There’s a nice plug. Maybe I can do a reading there!)

Thanks for the fun questions! 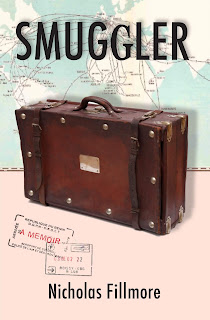 When twenty-something post-grad Nick Fillmore discovers the zine he’s been recruited to edit is a front for drug profits, he begins a dangerous flirtation with an international heroin smuggling operation and in a matter of months finds himself on a fast ride he doesn’t know how to get off of.

After a bag goes missing in an airport transit lounge he is summoned to West Africa to take a voodoo oath with Nigerian mafia. Bound to drug boss Alhaji, he returns to Europe to put the job right, but in Chicago O’Hare customs agents “blitz” the plane and a courier is arrested.

Later that afternoon I walked, drunk, through the Musee d’Arte Moderne in Brussels, down a winding white hallway to some inner recess. In a corner, behind glass, a little ventriloquist’s dummy in baggy pants and jacket sat before a brass bell. For minutes on end he just sat there with his feet sticking out in front of him, like he’d been knocked down in the street. Then something seemed to stir inside him and the doll’s torso jerked forward an inch and its metal head—bang! struck the bell producing an unexpectedly bright peal like the bell of a steamship. A little placard read, “Attempt to Raise Hell.” Dennis Oppenheim. American.

A small group waited in anticipation for it to happen again. Just as a couple turned to walk away, bang! the bell clanged again. I stayed for another half hour listening to the intermittent clanging; the little brute kept at it, as if he had a mind of his own—as if, in spite of whatever wind-up mechanism controlled him, he was determined to carry out this errand he alone knew the meaning of. 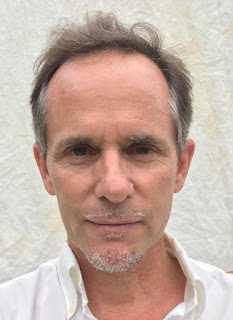 Nicholas Fillmore attended the graduate writing program at University of New Hampshire. He was a finalist for the Juniper Prize in poetry and co-founded and published SQUiD magazine in Provincetown, MA. He is currently at work on Sins of Our Fathers, a family romance and works as a reporter and lecturer in English. He lives on windward Oahu with his wife, his daughter and three dogs.