This post is part of a virtual book tour organized by Goddess Fish Promotions. Usher Morgan will be awarding an autographed copy of the book to a randomly drawn winner via rafflecopter during the tour. Click on the tour banner to see the other stops on the tour.

I was always obsessed with The Lord of the Rings series.

I still love fantasy novels, books like A Song of Ice and Fire¸ Harry Potter, etc. I am also obsessed with old self-help book such as the works of Napoleon Hill (The Laws of Success), Benjamin Franklyn’s The Way to Wealth, and As a Man Thinketh. As well as some recent ones by Tony Robbins and Gary V.

A DIY guide to filmmaking and distribution.

Just finished Michelle Obama’s Becoming, and am now deep into How to Live on 24 Hours a Day, it’s really old, but amazing! I’m also reading Lauren Bacall’s By Myself and On Directing Film by David Mamet.

Welcome to the Writer’s Life by Paulette Perhach.

I tend to start a new book before finishing the one I’m reading; therefore I always have 4-5 unfinished books sitting around my house. I always finish them, but I’m impatient to start reading when I get my hands on them.

Print, I love the smell and the texture. I have a Kindle but I don’t use it as much.

Mmmm… tough one. I’d have to say Frankenstein. I read it for the first time in 2018, and in the beginning I actually really liked it. But then I read Dracula, and for some reason my love of Frankenstein lessened. So… it’s not a bad book, just my least favorite.

This is going to sound weird, because it’s a book written specifically for women, but I’m not ashamed to admit that I read it, loved it, and would recommend it to anyone who’d listen. It’s called Girl, Wash Your Face by Rachel Hollis.

Always, I always do most of my reading. Actually, it’s on the weekends, but I have a daily reading ritual that I stick to religiously.

I live in New York City, so anywhere outside. Sometimes inside when it’s raining.

Rarely, and for a good reason.

The book that changed my life is actually 260 years old. It’s called The Way to Wealth by Benjamin Franklyn. And I think that if we taught it at school the world would be a different place.

I have a shelf, it’s overflowing. I need a new shelf.

Yes, but not often. I don’t really have a lot of time.

Too many misprints or amateurish writing.

I give away the bad ones, I keep the ones I love. 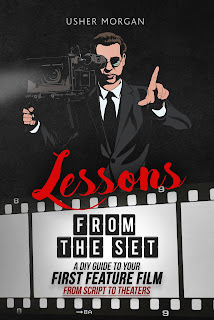 Lessons from the Set: A DIY Guide to Your First Feature Film, From Script to Theaters is a step-by-step filmmaking guide that takes a cinephile’s “Do It Yourself” approach to low-budget indie film production and distribution. This book will offer you some valuable, practical insight into the process of making a commercial feature film on a low budget and releasing it to theaters – whether you’re starting with $1,000 or $1m.

Lessons from the Set will guide you through the process of writing, planning, directing, producing, marketing, and releasing your first feature film. You’ll learn how to overcome writing challenges and improve the quality of your screenplay, how to make $0 budget short films and perfect your craft, how to plan your film, master filmmaking tools, and set the stage for your upcoming shoot.

This book is peppered with life-saving tips, tricks, and filmmaking techniques that will save you a lot of time, money, and energy on set, in pre-production and in post. You’ll learn how to release your film to theaters, how to tackle festivals and win awards, how to handle press and get reviews, execute marketing efforts, and approach the filmmaking process with both an artistic soul and an entrepreneurial mindset. Lessons from the Set was designed to give you all the tools and resources you’ll need to complete and release your film successfully in any market and help you set the stage for a prosperous career as a full-time indie filmmaker.

Making movies for a living is something that a lot of filmmakers aspire to. Being in a position where you can make films and release them to theaters or straight to video on a consistent basis is the ultimate dream for most, but it is also a cause of frustration and anxiety to many. I believe it to be the main reason why so many good people who venture into this business quit before their time. The cost associated with making films, along with the pressure and artistic skill demanded, and the obligation to adhere to budgets and generate revenue, can prove to be a challenging feat that many people assume is beyond their capabilities. There are plenty of people who proudly wear the “broke artist” tag and look with distaste upon those who go into this business for the dollar. The one thing that many “broke artist” types fail to keep in mind is that the movie business is a business and, like any other business, your job is to produce a great product, cost efficiently, sell it to consumers, and generate enough money so you can make more products. More products mean more revenue – that is the nature of any product-based business. The only way you can sustain your business is by making movies that generate revenue, and if you lose money on every film, you won’t last long.

Now, as far as I know, there are two key ways by which you can derive your income from making and selling feature films: (a) you can make a movie and sell it to a distributor; or (b) make a movie and sell it on your own. That’s it, really. However, when most independent filmmakers think about the prospect of getting their movie made and sold, they’ll opt to go for option A. They’ll send it to major film festivals in hopes that during their circuit, the movie will hit a cord with a capable distributor who would show an interest in buying it. If the distributor is big, they may get a theatrical release, and a good deal of money could follow. They’ll be featured in the press, be courted by agents, and have an easier time getting funding for their next project – and life will be grand! And if the distributor is small, the movie will go straight to DVD/VOD/Blu-Ray, and they’ll make a little less money and maybe have to work a little harder to get their next movie lined up, and the next one – it will be the big break they’ve been waiting for.

Take any of those filmmakers and offer them the opportunity to distribute their own films and they’ll snigger, “I’m not interested in doing marketing or handling sales; the business side of moviemaking is not something that I’m really interested in. I want to focus on making movies and let other people worry about selling them.” There is nothing wrong with that approach, it is, as the name states, an approach – it’s just one way of doing things. In fact, it’s the go-to approach for a big chunk of the filmmaking population. However, what do you think will happen if you take that very same filmmaker and give them a failed festival circuit? Meaning their film got accepted into festivals, but no one bothered to buy it; no one licensed it or showed any interest in distributing it... Well, now these very same filmmakers are in “panic mode.” They’ll eventually make their way to signing a deal with an online film distribution company, and their movie will most likely die in obscurity. These online, independent film distributors are the kind that’ll put your movie up on VOD and leave it there for seven years without doing a lick of marketing or promotion. They call themselves “film distribution companies,” but in reality, they’re more like vanity book publishers. They’re “movie brokers” – meaning they take your movie, put it on iTunes, Amazon, Xbox, Google Play, and other VOD channels via an aggregator (to which you, as a filmmaker also have access), and maybe send a press release out via their website and social media channels, and that’s it. The offer you get when you sign the contract is usually $0 in advance but 30% of the net, and you feel confident in the fact that you have a distributor and that your movie will finally see the light of day.

A month later, the film comes out to VOD, and this “distributor” didn’t put a dime into P&A (Print and Advertising). They didn’t market the movie, they didn’t sell it, they didn’t build a marketing plan for it, and they don’t intend to push it, promote it or sell it. It gets very few reviews from the indie-fans who might buy it online, and after two years of selling, you still haven’t seen a dime – because the distributor had “marketing expenses” that kept you from actually seeing a profit. Believe it or not, that is the actual situation that many independent filmmakers find themselves in after spending years of their life pouring their hearts and souls into the making of their indie features. They hope and pray that it’ll get picked up during the festival circuit and are willing to give up their rights to do so because the thought of leaving the festival circuit without a deal is terrifying. 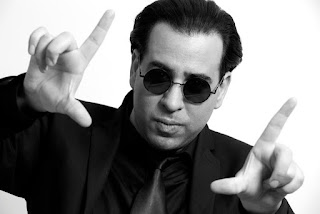 Morgan’s first feature film, Pickings was released to AMC theaters on March 2nd, 2018 and made its way to VOD in August of 2018. His directing style is influenced primarily by film-noir and spaghetti westerns. The Los Angeles Times calls Usher Morgan, “a talent to watch”.