Straight Browsing from the Library: False Light by Claudia Riess

This post is part of a virtual book tour organized by Goddess Fish Promotions. Claudia Riess will be awarding a $50 Amazon gift card or a set of Art History Mystery Books, Stolen Light and False Light (US only) to three randomly drawn winners via rafflecopter during the tour. 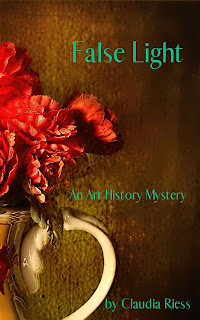 Academic sleuths Erika Shawn, art magazine editor, and Harrison Wheatley, a more seasoned art history professor, set out to tackle a brain teaser. This time the couple—married since their encounter in Stolen Light, first in the series—attempt to crack the long un-deciphered code of art forger Eric Hebborn (1934-1996), which promises to reveal the whereabouts of a number of his brilliant Old Master counterfeits. (Hebborn, in real life, was a mischievous sort, who had a fascination with letters and a love-hate relationship with art authenticators. I felt compelled to devise a puzzler on his behalf!) After publication of his memoir, Drawn to Trouble, published in 1991, he encrypts two copies with clues to the treasure hunt. On each of the title pages, he pens a tantalizing explanatory letter. One copy he sends to an art expert; the second, he releases into general circulation. The catch: both books are needed to decipher the code.

When the books are at last united 25 years later, Erika and Harrison are enlisted to help unearth their hidden messages. But when several research aides are brutally murdered, the academic challenge leads to far darker mysteries in the clandestine world of art crime. As the couple navigate this sinister world, both their courage under fire and the stability of their relationship are tested.

Erika would not permit herself to sleep. She gave in to her selfish body only to allow it to lean its skull and spine against the wall as she went over, again and again, the day’s nightmare. Reliving it kept the memory raw; healing, impossible.

There was a light tapping on the door. She didn’t know how long she had been sitting there, only that the scant light in the room had dimmed. There was another tap.

It was Grace. Erika had never heard the woman’s supplicating tone of voice, but who else could it be? “Grace?”

A kind of dull curiosity moved her to answer, “Come in.”

Grace opened the door and entered the room. She was holding a tray, bracing one side of it with her forearm. She turned the knob with her free hand and shut the door, then better secured the tray. “I’ve brought you some cream of tomato soup and a muffin. You need some nourishment. Would you turn on the light? You wouldn’t want this old lady to trip, would you?”

Grace’s gentle prodding was so uncharacteristic that it caused Erika to rise to her feet and obey, as if to the command of a hypnotist. She clicked on the wall light and took the tray from Grace.

“Where should I put it?”

Grace scurried to the vanity table and pushed aside Erika’s pads and pens. “Right here is good.”

Erika did as she was told. Grace pulled out the chair from the vanity and reached up to touch Erika’s shoulder. “Now sit and have some soup.” She smoothed her scalloped white apron overlaying her starched black dress and stood there, waiting.

“You don’t want to be hungry, but you are,” Grace said, without budging.

There seemed to be no choice but to heed Grace’s first prompt. Erika sat down. She had no intention of lifting the spoon provided. “Thank you.” She waited for Grace to exit the room.

Grace wasn’t going anywhere. She strode to the desk and dragged the desk chair to the vanity, placing it directly alongside Erika’s chair. She sat down. “You must take care of yourself—for yourself as well as your husband,” she said. “He loves you so. I have never seen him so distraught.”

“Harrison will be fine,” Erika said, staring straight ahead.

Grace shook her head. “Not if you aren’t.” She took Erika’s hand in her own. “I haven’t been very cordial to you. I apologize.”

“I have no children,” Grace said. “I worked for Harrison’s grandparents for fifty years. I’ve known Harrison all his life, and he is family to me; my only family. He is a dear man, but terribly naïve. It broke my heart to see his first wife take advantage of him. She nearly destroyed him. I was afraid you might do the same.”

“I won’t.” She withdrew her hand from Grace’s.

Erika turned to Grace. “I’m empty, Grace. Do you see that?” She returned her focus to the wall. 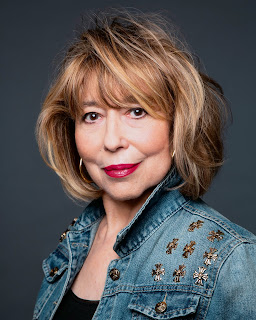 Claudia Riess, a Vassar graduate, has worked in the editorial departments of The New Yorker and Holt, Rinehart, and Winston and has edited several art history monographs.